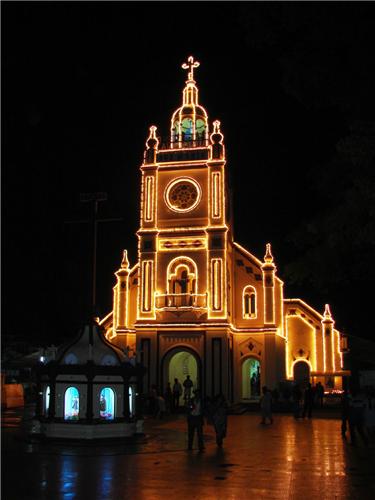 The Vallarpadam Basilica is a famous pilgrimage centre of the Catholic Church. You have people from Kerala as well as all over India coming here to pay their respects to mother Mary. She is also called ‘Vallarpadathamma’, a Malayalam word which means the mother who lives in Vallarpadam. Even people belonging to different caste or creed also come here to worship. This Basilica is located near the Bolgatty Island and it can be accessed form the Ernakulum mainland through the new Goshree bridges.

History of The Vallarpadam Basilica

The Portuguese Missionaries headed my Vasco da Gama built a Christian Church in 1524 and dedicated it to the Holy Christ. A picture of Virgin Mary in the form of Our Lady of Ransom was also inaugurated in this shrine. In 1676 the flood destroyed the church and the picture too got washed away. The Maharaja of Kochi, Paliyath Raman Valiyachan donated his land for the construction of a new church. The picture was retrieved and put back in this church. This image of Lady of Ransom is believed to have miraculous powers. In 1888 the Pope Leo X111 proclaimed it to be a special church and in 1951 it was declared as a pilgrim centre. Recently in 2005 the Vallarapadam Church was given the status of a Basilica by Archbishop of Varappuzha, Daniel Acharuparampil.

Myth and Beliefs of Vallarapadam

The Vallarpadathamma is believed to be very powerful and in many times saved her devotes from violent storm. In 1742 a Nair Lady Meenakshiamma along with her son was travelling in a boat. Due to a storm they were swept away by the flood. She was believer of the Lady of Ransom and she prayed that if they were rescued she would devote her life to the Lady until her death. On the third day as per a dream of the priest he asked a fisherman to cast a net in the river and hence Meenakshiamma as well as her son was rescued. After this incident Meenakshiamma and her son got baptized and got named as Mary and Jesudas respectively. From that tome onwards boats and ships seek the blessing from Vallarpadathamma before going on their voyages.

This is a special occasion which is celebrated between 16th to 24th September every year. Pilgrims irrespective of the caste or creed come to the Church to be a part of this festival.
Best Time to Visit: September to May
Mass Timings: 4 pm, 4:30 pm and 6pm, Sat: 6:30 am, 10:30 am

How to Reach The Vallarpadam Basilica

The Ernakulum Junction south is located at distance of 4 km from the Basilica. Once you exit from the station you need to reach the TD West Sannidhi Road that leads to the Market Road. You will pass Dhanalakshmi bank and Sea Lord Hotel. You have to opt for left turn and move to the Shanmugham Road. Next you will have to take a U-turn and move to the Abraham Madamakkal Road. And from the roundabout opt for the first exit onto the Goshree Road. Make a right turn to the Vallarapadam Church Road and after this make the first left heading towards the Vallarapadam Church Road. As you move ahead you will spot the church on the right side.