Sree Poornathrayesa Temple is one of the most famous temples in Kerala that is located at Tripunithura, Kochi. The yearly festivals which is called Utsavam is quite popular and you have people from all regions of country coming here to be a part of this celebration. Here Lord Vishnu in the avatar of Santhanagopala Murthy is worshipped. It is also believed that couples who are childless will be blessed once they visit and pray Poornathrayesa. 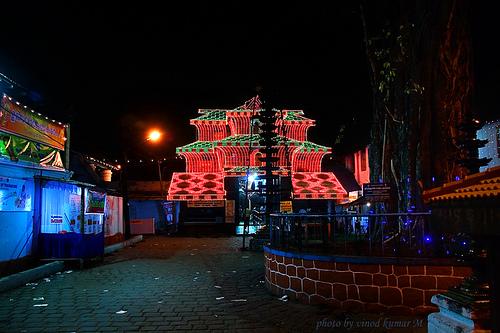 As per the Hindu mythology a Brahmin had prayed and asked Lord Vishnu for help in the rebirth of his ten children. Lord offered Arjuna an idol of Sree Poornathrayesa in helping him complete this task. Arjuna took the children as well as the idol in a chariot and the children were handed over to Brahmin. To remember and honor this incident it was decided to construct a temple. Lord Ganesha was assigned to search for an ideal spot to place the idol and in the meantime it was placed in a palace which was later called as s Poonithura Kottaram. A small village called Poornavedapuram was considered and its sanctity made him want it all for himself. But Arjuna did not allow him to do and placed him in the southern side. He took over this spot and placed his idol.

Sree Poornathrayesa Temple is designed beautifully and it features the traditional Kerala style architecture. In 1920 due to fire the temple had succumbed to many damages. Under the leadership of Sri Eachara Warrier, an architect, this temple was renovated and restored. This temple has a gopuram, an entrance gateway, which can be spotted on the western side and it is said to be dated back to the 11th and 13th century. It is two-storied structure and as you enter the first floor you can see the Mandapam as well as the eight crafted wooden pillars that support this Mandapam. Here the name Poornathrayesa is a combination of three words in which Poorna means complete, Threya means complete and Iswarya refers to Lord of Knowledge. The statue which is kept here has a Sanku, Chakaram and lotus temple all held in his hand. Many scriptures about the gods were kept here but due to the fire many of it got damaged. The very famous Valia Vilakku the lamp can be seen lighted in front of the idol. It is also believed that the used oil from this lamp is seen to possess medicinal qualities.

An annual festival called Vrishchikoltsawam is conducted in the months of November to December for up to eight days. During this time the elephants are dressed with decorations and brought forward for the celebration. People come here seeking blessing of the God and also offer graciously in the golden pot that is placed on the stage. For the general entertainment many cultural events like Chakyarkoothu, Kathakali, and Ottanthullal are also performed. Again during Onam a traditional festival of Kerala many interesting events like Pulikkali dance, Tableau and flute are also played.

How to Reach Sree Poornathrayesa Temple

The Ernakulum South Junction Railway station is located at a distance of 7KM from the temple. Once you get down from the station you need to move in south east direction to the Kadavanthara Road. You will reach Maveli Road and from there you will have to go on until you are at Market Road .Next turn right to go to Gandhi nagar road and then left at Kochu Kadavanthra Jct onto Ettumanoor - Ernakulam Road.Make a right turn at the St.George's Chapel that will take you moving towards Kochi-Madurai-Tondi Point Highway. Make a left turn to go the Kochi-Madurai-Tondi Point Highway and you will pass the Federal Bank. Now at last make a left turn at the Gandhi Square and you will reach Thripunithura - Maradu Road. You will soon reach Sree Poornathrayesa temple.