Kerala is land of diverse culture and religion. You have Hindu, Christians, Muslim, Jews, Buddhists, Sikhs, Jains and many more religions residing harmoniously in this state. As such you can spot many religious places in this city and respective community would be found residing nearby. To get a better idea of all the religious spots in Kochi here is a list of all the famous places in this city. 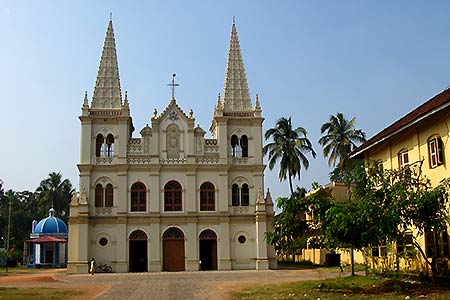 Santa Cruz Basilica was built by the Portuguese and it is one among the eight Basilicas to be presently functioning in India. It is situated in Fort Kochi and you have tourists all across the globe come here just to the visit this church. It follows an Indo-European and Gothic style architecture and other highlights include the paintings like the Last Supper as well as the passion of Christ. Click Here to Read More

The St Francis Church is located very close to Santa Cruz Basilica and this church too was built by the Portuguese. The great explorer Vasco da Gamma was buried here but later his remains were taken back to his homeland. But even today you can see the tomb stone kept in his remembrance. Read More

Situated on the Bolgatty island the Vallarpadam Basilica is a famous Catholic church. Mother Mary known as Vallarpadathamma is worshipped here and people irrespective of caste come here to pay respects before sailing off to the sea. The feast of Vallarpadathamma happens every year between 16th to 24th September and people from different places visit here to be a part of this celebration. Read More

The Jewish Synagogue is also known as the Mattancherry Synagogue as well as the Paradesi Synagogue. It’s architecture is very appealing and its interiors have been worked quite well. This is one among seven synagogues functioning in India and here Jewish ceremonies like the miniyan is also conducted. Read More

Here are the details of the temples in Kochi.

Sree Poornathrayesa worships Lord Vishnu in the form of Santhanagopala Murthy. This temple is very famous and childless couples often come here to seek his blessings. It is a two-storied building which has a Kerala-style architecture. It is also believed that the used oil from the Valia Vilakku, the lamp lighted in front of the idol, is said to have medicinal values. Vrishchikoltsawam the annual festival of the temple is celebrated with great pomp and lasts for eight days. Read More

The Chottanikkara Temple is one of the most famous pilgrim spot in Kochi. Melekkavu and Keezkkavu are the two temples located here. The Melekkavu is seen to worship Goddess Rajarajeswari while the latter has Goddess Bhadra Kali as its deity. This temple is famous because it is believed of curing mental illness as well getting rid of evil spirits. The annual temple festival in the Malayalam month of Kumbam between February and March is celebrated with great pomp. It lasts for seven days and you have many rituals  as well cultural programs during this time.

The Ettumanoor Siva Temple worships Lord Siva' according to the legend the Pandavas as well as Sage Vyasa has prayed here. The architecture together with the gopuram looks distinct. This temple is known for the arattu festival which is celebrated in the months of February and March. Another ritual which is quite famous is the Thulabharam where a child or man is put on a weighing scale and weighed against the fruits, butter or gold. Read More