Park Avenue in Kochi is an area with a long stretched line of trees and the green highlight makes it look beautiful. This road begins from Gandhi Road and covers up to Broadway. It covers a distance of 1 km and as you move on in this park you will spot many historical buildings too. 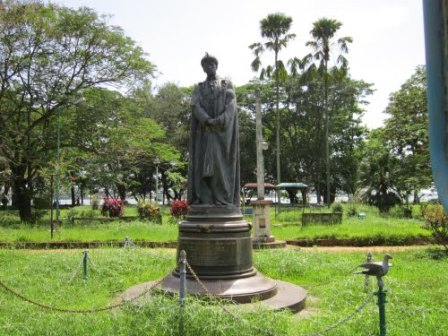 History of Park Avenue in Kochi

The King of Kochi Rajarishi Rama Varma was a nature lover and had great interest for gardening. He came up with idea of tree lined road just like ones in Western countries. And as per the directions given to the Divan a new park was built for common people to come and spend time. It’s called the Rama Varma Park and it’s located opposite to the Siva Temple. Further beautification with flowering beds were also done and restrictions were also done to prevent cutting of trees. The whole area looked very appealing and its beauty was liked by the respected British Resident of Kochi. Soon it was renamed as the Park Avenue.

The Road has got historical importance too and many important events has happened here. During the independence struggle the Maharaja College's students organized a protest not favouring the Kochi Kingdom. This agitation had to be brought down by the help of the police. Some other important events like Civil Disobedience Movement as well as the Independence Movement against princely states by the Indian National Congress all happened here. Again this park turned out be the prime places where the Aikya Kerala Vedic a meeting for United Kerala (Kochi and Travancore) was also held. Soon after Independence, the Tricolor was hoisted in this park after bringing down the Kochi Kingdom's Flag. Later on this road came under administration of Ernakulum Municipality.

Park Avenue in Kochi at Present

The Rama Varma Park basically has two portions namely the Indira Priyadarshini Children's park and the Subhash Bose Park. The children’s park is maintained by the funds provided by Central Government while the latter is managed by Corporation of Kochi. But recently it has not been maintained quite well. But this portion of city is really beautiful and is truly the highlight of Kochi.

The park begins with the Gandhi round and you can also spot the statue of Mahatma Gandhi here .The Maharajas College, Ernakulum General Hospital, Office of Cochin Corporation and Mayor's Office can be seen as you walk along this park. The Kanayaanur Taluk office which houses the Registrar’s Office as well as Treasury has a simple Kerala architecture style. Another landmark here would be the Revenue Tower which is a 24 storied building that looks remarkably splendid with its glass complete glass covering. The Cochin city police's Commissioner's office is located here and even some Government offices too. The Maharaja's Law College is also situated here and it was once the Kochi State Legislature Assembly Building. Other important structures include St. Mary's Cathedral, Corporation Guest House, St.Teresa's College, Government Guest House and KTDC Hotel.