The Parambikulam Wildlife Sanctuary is truly a nature’s abode with large stretches of green landscapes, waterfalls, valleys and more. It is situated between the Nelliampathy and Anamalai ranges that falls between Kerala-Tamil Nadu border. The sanctuary covers an area about 285 square km with a recent addition of 391 square kilometers as part of initiative for Parambikulam Tiger Reserve. It is the home for many endangered animals and it has been conserved quite well with negligible human intrusions. This reserve is significantly important and it was declared one of the World Heritage site by the Team of World Heritage Committee. 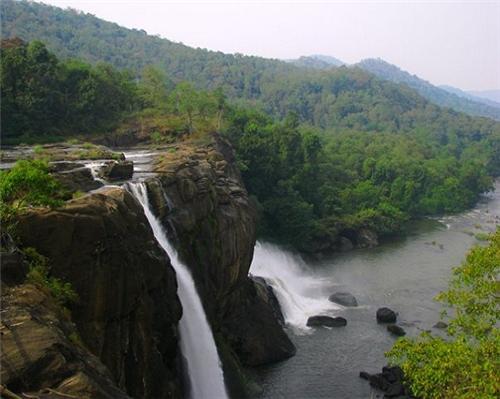 Massive cutting of trees for valuable timber and teak wood was major issue during the 19th century. A tram way was also brought about where in the wood could be transported from the forest to the roads. As part of the initiative to save trees teak saplings were planted across Parambikulam in 1921 as well as 1983. At that time the Parambilkulam forest were managed by two units namely Sungam Forest Reserve and Parambikulam Forest Reserve. Soon in 1951 the tram was abolished by an order passed by the Special Financial Committee.

The flora and fauna that exist within the sanctuary is preserved well keeping its natural beauty well intact. The altitude ranges vary between 300 to 1440m and the highest peaks found here include the karimala (1438m) and the Pandaravarai (1290m). The climate also varies between 15-32 degrees and ample supply of water is available for wildlife to survive. Parambikulam, Thunakadavu, and Peruvarippallam are three man-made reservoirs that exist here. You also have seven valleys and three rivers namely the Sholayar, Parambikulam and Thekkedy that run here.

Numerous trees like teak, rosewood, sandalwood, neem can be spotted in forest. This sanctuary is a proud to possess the oldest teak wood tree having a circumference of 6.8 metres (22 ft) and a height of 49.5 metres (162 ft). The tree is 140 years old and also has won the Mahavriksha Puraskar from the Government of India. The sanctuary is also the home to some tribes like the Kadar, Malasar, Muduvar and Mala Malasar who are seen to reside in colonies.

The sanctuary has over 39 species of mammals which include the Nilgiri Langurs, elephants, wild boar, Sloth Bears, Bengal tigers, Indian leopards and Nilgiri Marten Small Travancore Flying Squirrel. There are around 268 species of birds which include Black eagle, Black-capped kingfisher, Grey-headed Fish-eagle Peninsular bay owl, Black woodpecker, and Great Indian hornbill. The sanctuary has over 47 species of fishes of which seven fall in the endangered category. Other population of animals that reside in this reserve include reptiles of 61 species, butterflies of 124 types and about 16 species of amphibians.

There has been nationwide quest to conserve and protect the depleting tiger population.The Tiger reserve was initiated with this mission and it sought to keep them in their natural environment. It came into effect in February 2010 and an addition of 391 square kilometers was added to the wildlife reserve. The main idea was to encourage breeding of tigers and reduce the forest fires that were causing great damage to their habitat. Fire detection methods and quick damage control with people participation are also incorporated by the reserve.