Kochi is a land which embraces rich culture and traditions. The monuments seen here have been constructed centuries ago and each have a different story to tell. They have been preserved and protected by the government so that people can still come to admire the history of Kerala. 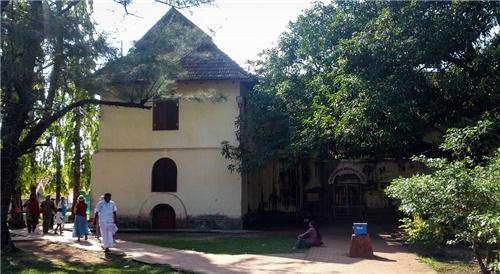 The Mattancherry Palace or the Dutch palace has numerous displays of paintings as well as exhibits dating back to the colonial times. They have been preserved and kept intact in this palace. This is two storied building with a Kerala style architecture popularly known as “Nalukettu”. Within the premises of the palace you can also spot two temples, one dedicated to Lord Krishna and the other to Lord Siva.

Click Here to Read More about Mattancherry Palace in Kochi

Positioned on the Bolgatty Island this palace was constructed by the Dutch and later it was leased out to British. Currently it is a heritage hotel and caters to needs of the tourists who come to visit Kochi. The palace has a rustic feel with slanting roofs and wooden framed windows. All together it looks magnificent and is surrounded by a beautiful garden on its 8 acre property.

It is situated in Fort Kochi and is one among the eight Basilicas currently functioning in India. After the rule of Portuguese it went into the hands of the Dutch as well as the British. It was raised to the level of Cathedral in 1558 and in 1984 after an issue of a special Decree it was declared a Basilica. The architecture also looks splendid and its interiors also look quite exquisite.

The St Francis Church was built by the Portuguese with the consent of the Maharaja of Kochi. After Independence it became government property and soon went in hands of the Archeological Survey of India. It’s presently run by the Church of South India. The church has traditional look with two pinnacles on either side. Interiors are also well done and ancient records of Dutch as well Portuguese are still kept safely here.

The Pallipuram Fort is one of the ancient European fort to be seen in India. Situated on the Vypeen island this fort is also called the ayikkotta .It was constructed in 1506 by the Portuguese and it was named after a nearby Manjumatha church. In 1663 the Dutch captured this fort and later in 1798 it was purchased by the Travancore kings to safeguard their lands from the Mysore rulers. After independence it is administered by the Archeological Department of Kerala. The fort has a hexagonal shape and has been constructed with laterite, mortar as well as wood. The lowest floor has a height of five feet and walls measure 6 feet thick. It has three embrasures on each face and each side approximately measures 32 feet long & 34 feet high .Walls have been plastered with mortar and there is also a granite slab door. On the northern side there is a cellar that was once used to stock gunpowder. A well is also spotted in the premises where fresh water is available.

The Jewish Synagogue depicts the Jewish connection with Kerala. Jews came to this land for trading in spices and soon settled here. This Synagogue also known Paradesi Synagogue was built by them and it is one among the seven Synagogues to be currently functioning. The miniyan the ritual among the Jews is performed here and people of all religions are also allowed to visit this Synagogue.