The identity of Kochi is not just limited to being a beautiful tourist spot in God’s own Country-Kerala. The city and its surrounding areas have their own culture, food and favorite dishes. People in Kerala are big foodies and Kochiites are no exception. They too love their own food and have their favorite dishes. Although fast food is always in demand in various parts of Kerala, including Kochi, the town and the sub-urban dwellers have a great variety of local dishes, the taste of which is unmatched, anywhere else in India.

Tourists and people outside Kerala are under the common assumption, that much like all other South Indian states, Kerala too offers only dishes like Idli, Dosa, Vada Sambhar, Curd Rice and Poha.  But the Keralian cuisine is quite different from its South Indian counter parts. They have a huge variety in fish and meat dishes that are cooked with a variety of spices in different methods. The place is a haven for non-vegetarian food lovers, predominantly fish lovers.

Fish delicacies are the most favorite of the people of Kochi and the rest of Kerala. They have a variety of fishes available to them due to the salty water of the sea, the freshwater from the backwaters and a combination of both sweet and salty water where the river and Arabian Sea merge into the backwaters. This variation in water where all fishes are bred, offers a geographical condition that is suitable for river fish, sea fish and a huge variety in the type of fishes. So the food habits of the Kochiites are in tune with their geographical area and the natural gifts of Nature.

Kochi is known for being specialists in creating a variety of fish delicacies. One of these delicacies is the Meen Molagitta Curry which is found in all big and small restaurants of the city. It is also cooked at home by the locals, the taste of which is much better than the ones prepared in the restaurants.

How to Prepare Meen Molagitta Curry 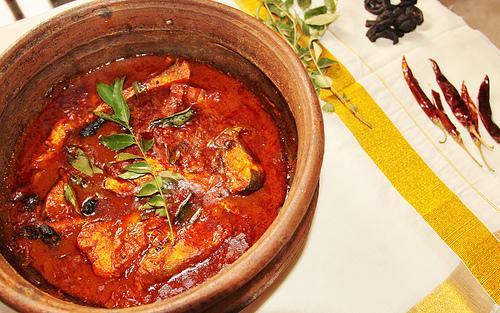 Origin of the Meen Molagitta Curry

Meen refers to fish in Malayalam and Molagitta refers to Coconut curry.  The dish is named so as both these ingredients are quite critical to the curry as without them the dish cannot be created. This form of the fish delicacy was introduced and popularized in Kerala by the English following their expedition to India through the southern coastal region of India. The fish in this is neither fried nor boiled, it is smoked which is basically an English dish. The English added mashed potatoes and steamed bread to their smoked fish which later went on to becoming a Malayalam with the addition of coconut and chilly.

This dish is best served with steaming hot Basmati rice and a little bit of Ghee. So now you can either enjoy the delicacy in a houseboat on the backwaters of Kochi or you can simply make it at home with one of your favorite fishes.

Explore more about Food in Kochi