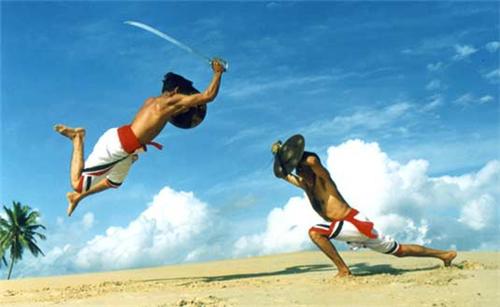 The famous martial art of India, Kalaripayattu, has its origins during the 9th century AD in the southern state of Kerala. This used to be the primary art of warfare for the warrior clans to defend their king and the kingdoms. This form of the martial art was the outcome of a long and extensive war between the kingdoms of Chola and Chera dynasties of southern India during the 11th or the 12th century AD. The entire state was divided into small territories that were always at war with each other during this period. The name took its form from payattu kalari, which means the fight school.

The school or the kalari where this martial art used to be originally taught were constructed as per vastu shastra. The entrance to this structure used to be made east facing, with its main door used to be positioned at the center-right. The energy levels of the building used to be balanced using the ancient sciences like tantra shastra, mantra shastra and marma shastra. At the south-west corner of the building, there used to be a seven tiered platform called the puttara, which was the actual training area. The guardian deity of the institution was placed here. The guardian deities used to be incarnation of either, Kali, Shiva or Bhagawati and used to be worshiped before each training session, with prayers, incenses, flowers and water.

In the northern parts of the erstwhile region of Kerala, especially in Cochin or Kochi, the martial art used to be practiced inside special roofed pits at the depth of 3.5 feet below the ground level. The base of the pit used to be made of wet red clay, in order to provide a cushioning effect, so as to prevent injury. The depth of the floor also protected the practitioner’s body temperatures being affected by the winds. Meanwhile, in the southern part of the state, the martial art used to be practiced under unroofed palm branched enclosures or in open air. In case the school or the kalari had to be closed down, the building would be retained and converted into a small shrine for the guardian deity.

Other than just being fight schools, the payattu kalari also served as learning centers, before the onset of the modern educational system. These places were the centers of acquisition and dissemination of knowledge in various subjects like languages, mathematics, astronomy and many theatrical arts.

The art of Kalaripayattu primarily consist of strikes, kicks, grappling, preset forms, and weaponry. There are certain variants based on the region they are performed. The Northern style of the art is found in the Malabar region, meanwhile the Central style is visible in Kerala interiors. The Travancore region exhibits the Southern style of this art form. However, the southern style is extinct now and has been taken over by the Tamil style of "Adi Murai". The northern style has evolved into a very distinguishable feature, different from its other regional counterparts. The northern Kalaripayattu has very elegant and flexible movements, evasions, jumps and weapons training. Meanwhile hard impact based techniques with priority in empty hand fighting and pressure point strikes are the marquee of the Southern style. However, both the variations of the art deploy concepts of internal and external body strikes.

The art of Kalaripayattu has also flowed into some subtler forms of art performances. Due to the flexibility and elegance, some of the training methods are also used in the various regional dance forms of Kerala, including Kathakali. This was promoted by dancers, who were deft in the art of Kalaripayattu. They were found to be remarkably better than the other performers. Due to this, many other traditional Indian dance schools of the modern day has adopted Kalaripayattu as part of their training regimen.

Interestingly, this art also includes healing methods. It is said that the warriors who were experts in Kalaripayattu could disable or kill their opponents by merely touching the correct marmam (vital points of the human body). In order to prevent the misuse of the technique, this expertise form of the art was taught only to the most promising and level-headed students. The famous medical practitioner Sushruta (6th century BC) composed his acclaimed document named the Sushruta Samhita, where he identified and defined 107 vital points of the human body. 64 of these vital points were classified as being lethal if properly struck with a fist or stick.

Based on Sushruta's work, the ancient Indian medicinal science Ayurveda was born. As a result of this research, the findings were taught alongside various Indian martial arts that had an emphasis on vital points. As a result of learning about the human body, Indian martial artists became knowledgeable in the field of traditional medicine and massage. Kalaripayattu teachers often provided massages (or uzhichil) to their students, using medicinal oils. This was done in order to enhance their physical flexibility and also as treatments for muscle injuries encountered during practice.

Unfortunately, the Kalaripayattu underwent a period of decline when the local warriors of the Nair dynasty lost to the British. These warriors with their traditional mode of contact warfare were no match against the introduction of firearms. When the British colonial rule was fully established in the 19th century, the art of Kalaripayattu was banned in order to prevent rebellion and against fuelling of anti-colonial sentiments. Due to the crackdown of traditional martial art forms across India during the British rule, many Indian martial arts got secluded into being practiced in rural interiors and in absolute secrecy.

However in 1920, the public interest in Kalaripayattu again gained momentum in Tellicherry. This was as a part of a resurgence wave of rediscovery of the traditional arts throughout south India. This continued through the 1970s, where a surge of general worldwide interest happened in martial arts. Of late, the Kalaripayattu has had its media exposure with it being featured in a number of international and movies like  Indian(1996), Asoka (2001), The Myth (2005), The Last Legion (2007) and Commando (2013).

During the modern period, the practice of this martial art got centralized around the region of Cochin in India. However, this is also practiced in other northern and central parts of Kerala, some parts of Tamil Nadu and also internationally by some Malayali communities in Malaysia.