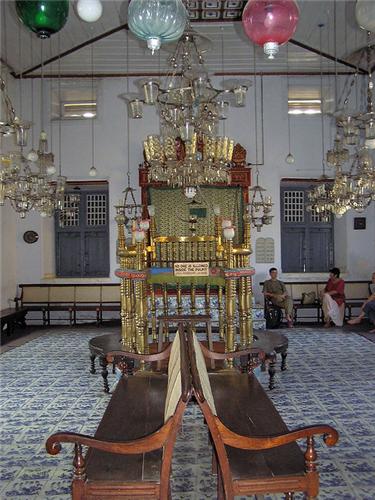 Jewish Synagogue is one of the historical monument seen in Kochi. It was once built by the Jews who came to Kerala for trading in spices. Its architecture is beautiful and it is truly a landmark of this place. This synagogue is located in the old Jew town and share a common wall with the Mattancherry Palace. And as such this place is also called Mattancherry Synagogue.

Jews who had left their hometown came to Kerala and made this their place of stay. They traded in spices and they had become prosperous in this field. The Jews had built a Synagogue in the 4th century in Kodungallur along the Malabar Coast. But later this community shifted to Kochi and a new one was built here. But alas this was destroyed by the Portuguese in 16th century. Later in 1568 on a land given by the King of Kochi the Jews residing here built a Synagogue that was adjacent to Mattancherry Palace. It is also referred to as Paradesi Synagogue as it was built by Spanish spoken Jews. The 400th anniversary of this synagogue was celebrated in 1968 which was attended by then Prime Minister Indira Gandhi.

Customs and Traditions of Jewish Synagogue

Of all the seven synagogues located here, the Jewish Synagogue in Jew town is the only one functioning currently. This place of worship attracts people from everywhere and it is seen to conduct a miniyan a religious ritual among the Jews. This place is open for all visitors but everyone must enter barefoot. Religious ceremonies are performed here and grape-soaked myrtle leaves are also given on special festivals.

Objects on display at Jewish Synagogue

The glass chandeliers look extremely beautiful and are of Belgian origin. The floors feel distinctive with its hand painted porcelain tiles that can be dated back to 18th century. This place also has the Scrolls of Law and numerous coins handed over as gifts. Some other interesting items are the brass-railed pulpit and 18th-century clock tower that was restored in 1998 as well 1999. Copper plates dating back to 10th century can also be seen on display. This was given to Cochin Jew Joseph Rabban by the King of the Malabar Coast. There is also an oriental rug that was gifted by last Ethiopian emperor Haile Selassie. This Jewish Synagogue has a tablet that was brought from the Kochangadi synagogue in Kochi. It was put up on the outer walls and has inscriptions written that means “an abode for the spirit of God”.

How to Reach Jewish Synagogue