Durbar Hall Art Gallery is a place where art exhibitions are held frequently. It is surrounded by a 2 acre property which is a popular ground for cultural activities. It is located on the Durbar Hall Road and is next to the famous Ernakulum Shiva Temple. 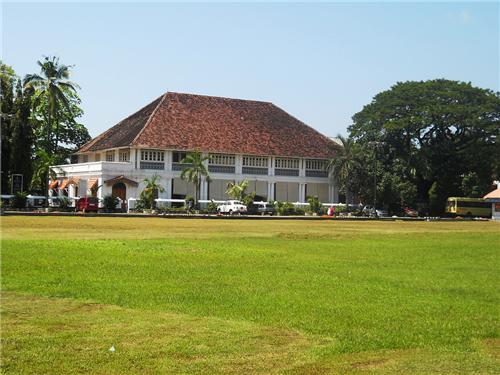 The Durbar Hall Ground has got great historical importance. During the reign of Kochi Maharajas this place was a common ground for conducting various events. The building where the art gallery exists used to be place from where the proclamations were given and the general public would listen from the open ground. In fact the announcement of the Cochin state in 1938 and the Cochin State Central War Committee in 1940 were made on this very ground.

It was also a popular location for football, cricket matches and even military parades. Football matches between the local Town Club and British Army was a highlight during those times. These matches drew good amount of crowd and supporters could be seen seated on the small walls surrounding the ground. Later on as a part of development plans roads were widened and the grounds could not to be used for such matches.

The Durbar Hall also served as a court room, an office of the National Cadet Core (NCC) and later it became the office of the Pallivasal hydro-electric project. But after this the hall was transformed into a museum with archeological findings and it was called Parikshith Thampuran Museum. In 1989 the Kerala Lalit Kala Akademi was given the first floor of this building. Later they opened the Gallery of Contemporary Art in the upper floor and soon in 1992 the Akademi was entrusted the whole building.

For long time the Durbar ground was left abandoned but with the initiative of the District Tourist Promotion Council the place was restored in 2002. They invested around 50 lakh INR to beautify the surroundings and restore it to its grandeur. As part of the plan green lawns, walkways, open-air auditorium with all facilities, light towers, pay and park options were also added to this area.

The interiors of this hall look splendid and it does have a modern touch to it. This two storey building houses art works of Raja Ravi Varma, Manu Parekh, Souza and Padmini. And again exhibitions of various upcoming artists are also held here.