Chottanikkara Temple is a famous pilgrimage centre and it’s one of the prominent temples of Kerala. This temple comprises of two deities namely Melekkavu and Keezkkavu. As you enter the temple you can spot Melekkavu where Goddess Rajarajeswari is kept. Behind this temple you can see the Keezkkavu which is presided by Goddess Bhadra Kali. Other shrines devoting to Ganesha, Siva, Nagas and Ayyapa are also kept here. 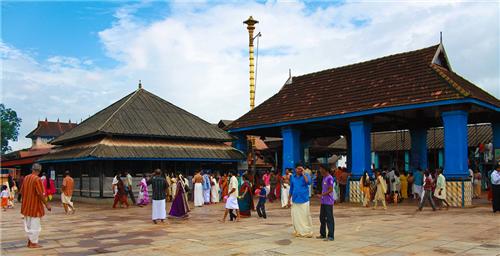 Chottanikkara Temple is located 15 km from Kochi and it's considered to be a very powerful place. Here Rajarajeswari is worshipped as Saraswati (Goddess of Learning) in the morning, Lakshmi (Goddess of wealth) in the noon and as Durga (Goddess of Power) in evening. Each Goddess is adorned as white for Saraswati, Crimson for Lakshmi and Blue for Durga. Another Goddess prayed here is Amme Narayana Badre Narayana. The Keezkkavu temple where Bhadra Kali is worshipped is believed to be very effective for curing mental illness and even get rid of evil spirits. As per the custom such people are required to come and pray here for 41 days. Within the premises of the Temple you can also spot the tree where hundreds of nails are pushed into it as a sign of removing exorcists from the worshippers.

As per the Hindu mythology this Temple was situated in a forest and there is a story behind its creation. A tribal hunter named Kannappan lived with his daughter in the forest. He was a believer of Goddess Parvathy and to show his devotion he sacrificed an animal every day. Now his daughter owned a cow which was very dear to her. One day Kannappan did not find an animal for his sacrifice so he asked his daughter for the cow to perform the ritual. She was sadden and she asked him to take her for sacrifice instead of the cow. Hearing this Kannappan was very moved and he realized how cruel he had become. Next day the cow was changed into a stone and it is believed that the cow was Goddess Mahalakshmi. On the very same day Lord Vishnu came before Kannappan and forgave him for all his mistakes. He also promised to be present in the Temple together with the Goddess. As per legend the place where the sacrifice was done is spot where the Keezhe kavil Bhagawathi is situated.

The annual festival happens in the Malayalam month of Kumbam which is between February and March. The seven-day celebrations begin with flag hoisting and continue with other cultural activities too. The Pooram Ezhunnellippu is a nice sight to see with seven elephants and this is done both in morning as well as at night. Another festival is Vrishchikam Mandala Mahotsavam where celebrations happen with prayers, annadanam and numerous stage programs. During this time the Goddess birthday is also celebrated for three days. Rituals like lakshaarchana and Vedamura abishekam are performed from January 1.

How to Reach Chottanikkara Temple

The Ernakulum Railway junction is located at a distance of 15 km from the Chottanikkara temple. From the station you have to move south east on the Kadavanthara Road which leads you to the Maveli Road. You have to head towards Market road and make a right turn on Gandhinagar Road. Now once you reach Kochu Kadavanthra Junction make a left turn that leads you to Ettumanoor - Ernakulam Road. You need to continue on Kochi - Dhanushkodi Rd/Kochi-Madurai-Tondi Point Highway and make a right turn on the Irumpanam Junction while you still stay on the highway. Next opt for left turn at Karingachira Junction and move on to the Thiruvankulam Chottanikkara Rd from the Thiruvankulam Junction. You will pass by the Kerala Gramin Bank and you will reach the Chottanikkara Mulanthuruthy Rd. From here take a left turn onto Chottanikkara Vandippetta Rd. Make a right near the Shobha textiles and a left at the Lakshmi Sweets center. You can spot the temple on the left.