Chennamangalam Synagogue depicts the rich heritage of the Jewish settlement in Kerala. Here you have numerous artifacts preserved and a great deal of work has been done to prevent them from being worn out by time. This synagogue is located in a rural settlement of Paravur taluk in the district of Ernakulum. 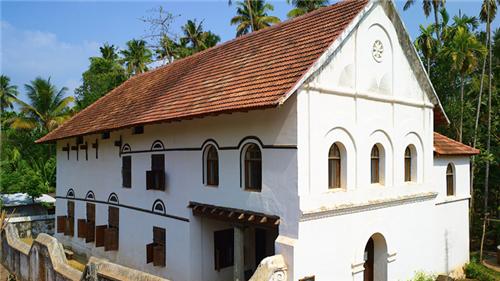 The Jews fled from their hometown after the complete demolition and the debris of Jerusalem. They reached the shores of Kerala and they settled in Fort Kochi in 1341 AD. The Paliath Achans who were the Prime Minister to the Kochi Maharajas had strongly promoted all religions. They had initiated the work of a temple, mosque, a church and a Jewish synagogue in the town of Chennamangalam. The Synagogue was constructed in 1614 AD and it adapted the architectural style of Kerala. Now as years went by numerous repair work and rejuvenation of this synagogue was carried out. Some interesting elements of this synagogue is kept intact and this include white washed walls with lime plaster, timber roof frames which include tiles made of clay and even large windows as well as doors.

Somewhere in the 17th century the Portuguese had oppressed the Jews in this area and it is believed that they had set fire to Chennamangalam Synagogue as well as the Kochi Jew Town. It is not completely known if Chennamangalam Synagogue was fully or partly ruined. As per the survey conducted by the Archaeologists in 2005 it is also found out that it was erected in 1565 and restored in 1621. The restoration work was undertaken by V. Manmadhan Nair and team of professionals. The total cost of undergoing this project was around 40 lakhs and it was completely sponsored by the Kerala Government.

The task for complete reconstruction took over ten months time and during this time Archaeologists appointed by government as well as private teams like Thampy and Thampy contractors worked on it. Once the work was completed a scheme from eminent professionals including Dr. Shalva Weil, Professor Jay Waronker and Marian Scheuer Sofaer was presented before Dr Nair. As per the proposal the Chennamangalam Synagogue was to be relaunched as India’s first Jewish Heritage museum. It displayed exhibits of the Chennamangalam Jews and it was financed by the Taube Foundation for Jewish Life in San Francisco as well as individuals

How to Reach Chennamangalam Synagogue

The Ernakulum South Junction is located at a distance of 29 km from the Chennamangalam Synagogue. The Aluva railway station is at shorter distance of 18 km so it’s better to get down here. But not all trains stop at the Aluva station so you need to make sure while you book your tickets.

As you leave the station you have to head towards the Railway foot over bridge road by taking the south west direction on the Aluva Munnar Road. As you approach the roundabout you need to take the second exit on the Masjid Road. Next take a right turn by passing the Online IT Shoppe and head towards the market road. Go left to catch up on the NH 47 and continue on this road as you pass Hotel Periyar. Make a left turn at the Paravoor Kavala and you will reach the Aluva-Paravoor Road. Now you will pass Indian Oil Petrol Pump and a KV LP School. Next take a right turn at the Vithayathil Glass House and you will head on to the Paliyam Road. You will have to opt for a slight right turn but you will still be on the Paliyam Road.You will pass by the Chennamangalam bridge on the right and after this take a left turn at the BSNL office.As you continue on the Paliyam road will pass by the Nair Samajam Hospital and soon you will spot the Synagogue.